Lutalo Muhammad: hungry for more silverware as he reflects on his Olympic Taekwondo success for Team GB

Nick Davis, Business Psychologist and Director at the management consultancy Davis Associates, looks at how the implementation of psychological techniques have helped bring success to Lutalo and raise performances across GB Taekwondo.

At London 2012 the country got behind our home athletes like never before.  However, there was one innocent victim of vile abuse who most wished wasn’t there.  His only crime was to be selected ahead of another.  How did he cope in the face of such pressure and what role did psychology have to play in turning around his Olympic dream?

Stepping down off the mat, having been beaten in the Quarterfinal, “it wasn’t meant to end like this.”  The emotion still raw in his voice, “it sounds like a cliché but this really was the lowest point of my life, I just wanted to go home,” remembers Lutalo Muhammad.

For just over a year ago home was Walthamstow, only 8 miles from the ExCeL arena in London where he’d just lost his bout. In most other competitions he would have gone home but this was the Olympics and just 45 minutes after his loss he got a chance at redemption.  The Spanish fighter that so emphatically beat Lutalo in their Quarterfinal fight had made the final and with that he was entered into the Repechage and a chance to go for Bronze.

Sitting in the East Manchester Academy [the home of GB Taekwondo] Lutalo talks slowly, articulately and in measured tones; indicating a level of maturity beyond his 21 years.  “I’d say I’m quite laid back and easy-going.”  For a man whose honed frame belies his soft voice, this calm demeanour is reflected internally too.  For nerves aren’t something he struggles too much with these days: “Although a few butterflies are impossible to avoid, if I’ve done the training and stay focussed then I’m confident I can beat anyone.  There are enough people doubting you, so why be one of them.  I believe in myself, thank you very much.”

Dealing with pre-fight anxiety is something that Lutalo has mentally worked to get under control.  “I used to complain to my dad and make excuses not to turn up.  During my first few tournaments as a kid I would throw up after fights; win or lose.  But I did a lot of winning.”

His father Wayne, who owns a gym in Hackney just a short bus ride from the Olympic Park, first introduced Lutalo to the sport of Taekwondo at the tender age of 3.  By his eighth birthday he was contending his first competitive bouts.  “I’ve been on the mat so many times now,” explains Lutalo, that any anxiety he once felt has been replaced with ‘calm and focussed aggression.’  “I know what I need to do and nothing will distract me from that.”

However, the build up to the London Olympics is a time Lutalo would rather forget and it has been well documented the amount of negative attention he, his family and GB Taekwondo received.  The decision to take Lutalo instead of Aaron Cook (ranked World Number 1 at the under 80kg weight category, but based on the last 4 years worth of data) was met with derision from many quarters.  “Hate mail was posted through my parents’ door, reporters following and harassing my father at his place of work,” sighed Lutalo.  “I was fortunate to be in a protective bubble (at the GB Taekwondo academy) but it was difficult to ignore what was going on.  I became infamous because of the situation and for how the media portrayed me.”

The decision not to select Aaron Cook looked to discredit the Taekwondo selectors after Lutalo crashed out of the Olympics in the Quarterfinal; affirming the opinions of those critics he so desperately hoped to prove wrong.  “In hindsight it affected me, a lot more than I was prepared to let on.  As laid back and relaxed as I am, I found it impossible not to think about it,” he reflects, leaning forward in his seat.  Lutalo began his Olympic adventure by breezing through his Preliminary Round fight 7 points to 1 against Farkhod Negmatov (Tajikistan) however he soon came unstuck against Spain’ Nicolas Garcia Hemme in their Quarterfinal contest.

“I felt cool in the warm-up but when I walked on to the mat it hit me.  I’m not one for making excuses but I wasn’t myself in that bout.  My style of fighting is normally quite unorthodox and free but I wasn’t taking risks.”  Lutalo was fighting conservatively, “I played it safe and that doesn’t work for me.  I came out knowing that if I lost the media would have a field day.”

“The ‘Chimp’ part of his brain had taken control” as Sarah Broadhead, GB Taekwondo’s resident Psychologist would go on to say.  Sarah has been schooled in the now highly regarded mind-management model known simply as ‘The Chimp Paradox,’ developed by the Consultant Psychiatrist, Dr. Steve Peters.  Dr. Peters, who works closely with Sarah, has been widely acknowledged as being instrumental to a number of high performance athletes’ recent successes, most notably members of Great Britain’s cycling team.

The model simplifies our brain (Psychological Mind) into three separate categories: the Human, Chimp and Computer.  The theory states that we have our ‘Human’ brain which is rational and provides intelligence, our ‘Chimp’ brain which is highly emotional and the ‘Computer’ brain which acts as a reference point and is a storage area, managing routine things.  Any one of these parts can take complete control of our mind in a given situation but usually they work together.

“When working with our athletes over time we try to assess these different parts of their brain,” says Sarah.  “We look to understand their ‘Chimp’ part; how do they think when they are in the emotional mode and how best to move them out of that.  We look at their ‘Human’ side; so what are they like when they’re rational, calm and thinking quite logically.  Then there’s the ‘Computer’ bit of their brain.  This is where your beliefs and value system is stored.  So what are their beliefs around certain things and how might they need to be challenged?”  Sarah goes on to say, “Some of these might be limiting beliefs, so we need to know how to challenge those for each of our athletes.”

Lutalo credits much of his turn around over the course of that Olympic day to his coaches (Joseph Salim and Paul Green) as well as the advice given by Sarah.  For the Olympic event is somewhat different to normal competition.  “It’s an unusual situation,” says Sarah.  “Normally if you lose you go out.”

In the Olympics, however, those athletes that lose to an eventual finalist go through to the Repechage in order to contest for the Bronze medal.  It was now that Sarah’s teaching and advice came to the fore.  “We needed to let him get his emotions out,” remembers Sarah.  In terms of the model “we call this exercising the Chimp.”  This helps “reduce the power of this ‘emotional’ part of the brain.”

He now had a choice, ‘Do I keep on going down this route or do I re-set my targets?’  “If the Chimp part of your mind is in control you make emotional, irrational decisions.  So we encourage our athletes to be honest about what they are thinking.  By not seeing these thoughts as a weakness and then by saying what is on your mind it can be a huge release.”

Sarah was able to help deescalate the situation, put some logical structure behind Lutalo’s emotions and bring him back to the new plan.  Lutalo remembers vividly the moment he was told, ‘This Bronze medal is now your Gold.’  “That was all I really needed to hear, it really resonated with me and felt like a massive weight had been lifted from my shoulders.  We don’t normally get second chances and there was no way I was going to lose twice in one day.”

Shifting Lutalo’s mind-set by reducing the dominance of his “Chimp” part of the brain allowed him to regain his composure and refocus on this new target.  “When I went back on to the mat I felt free and relaxed, with nothing to lose,” remembers Lutalo.

“When he focuses on what he is good at and when he fights his fight, he’s amazing,” muses Sarah.  And that he was, eventually going on to defeat Arman Yeremyan of Armenia 9-3 in the Bronze medal match, becoming the first male in GB Taekwondo history to win an Olympic medal.

With the Olympics behind him Lutalo knows that this is only the beginning; “I don’t want this Bronze medal to be my legacy, I’d rather see it as a stepping stone.  Yes I had to deal with a lot and that was not the best preparation but it’s in the past.”  For what he went through, the excruciating lows followed by the exuberant highs Lutalo expresses that it’s “only made me stronger as a person.  I will use all I’ve learnt going into the World Champs [to be held in July 2013 in Mexico] and then to defend my European Championship title.”

Lutalo will only be 25 if selected to try again at the Rio Olympics.  “It really hit home,” as Lutalo describes his renewed motivation and drive, “when I was standing on that podium to collect my Bronze.  I looked up at Argentina [gold medallist Sebastian Crismanich] and saw a grown man cry.  He’d reached the pinnacle of his sport and I’ve got to wait another 4 years to get an opportunity like that.  I have the ability to win, I feel I could’ve two months ago but God willing if I can qualify and stay fit I can win Gold,” he says puffing out his chest.

With Lutalo’s confidence buoyed and the continuing support of Sarah he is working on blocking out those unhelpful thoughts when the pressure is on.  He wants to go in to the French Open concentrating hard on being in the ‘zone,’ “where I’m completely focussed on nothing else but those next 6 minutes.  It doesn’t always happen, you can be half in the zone and (during these periods) you can fail.  If I can be 100% on my game and in that zone then that’s what I want to work on.”

From their base in Manchester it is apparent that GB Taekwondo are getting the most out of their elite athletes through the dedication of their whole back-room staff.  The acceptance by all that psychologists too can have a direct impact and play a crucial part in helping squeeze an extra 10% out of their athletes is having an effect.  At this level that can be the difference between opening round defeat and winning an Olympic medal, as proved by Lutalo Muhammad.

Nick Davis is a business Psychologist and Director at Davis Associates, helping clients across the globe to achieve greater individual, team and organisational performance. Passionate about the beneficial qualities psychology can have within the workplace, see how Nick and Davis Associates can unlock the hidden potential of your workforce, click here. You can also find Nick on Linkedin

How to be a Great Sales Manager in 5 simple steps 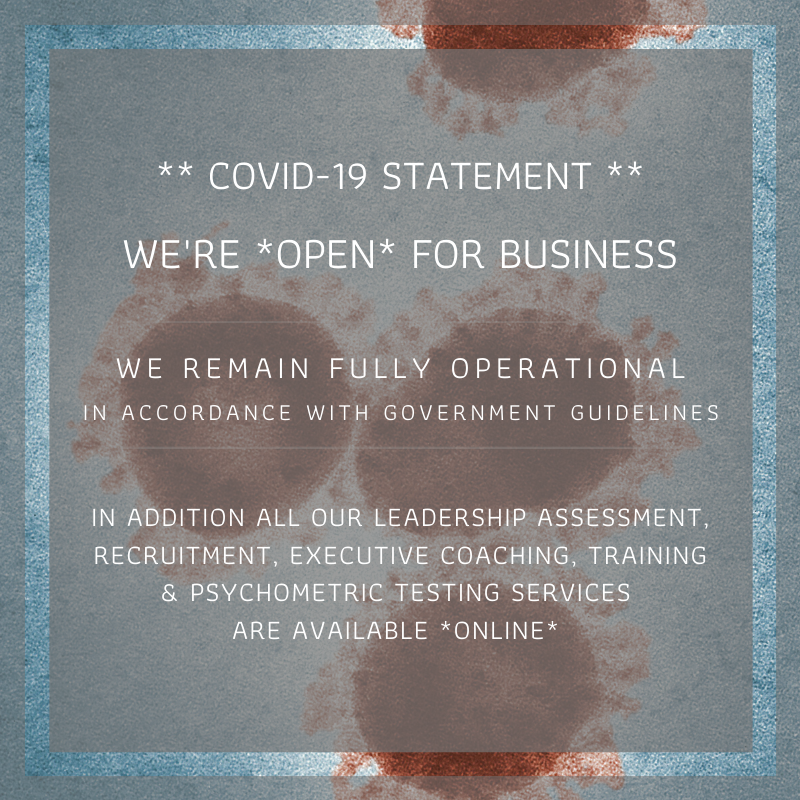